Immune thrombocytopenia (ITP) causes low platelet counts leading to a range of physical and emotional side effects. ITP is determined by ruling out other causes of low platelets, such as an underlying illness or medications you or your child may be taking.

Platelets—the small, disc-shaped cells that bind together when recognizing damaged blood vessels—are very sensitive and can react to many substances, interfering with their ability to clot or triggering their removal from circulation.

There are many well-known causes of substance-induced thrombocytopenia, or a low-platelet level and associated bleeding. In fact, studies have shown several hundred drugs, toxins and herbs cause blood abnormalities, and drugs account for 20 to 40 percent of all instances of cytopenias.1

Understanding what can cause a low platelet count can help those with ITP manage their platelet production, or ease symptoms for those whose low count is caused by outside influences.

Some important outside influences of low platelet counts include:

When drugs are the cause of low platelets, the disease is called drug-induced thrombocytopenia (DITP). In some cases, using certain chemotherapy drugs can result in a drop in platelet count due to changes in the bone marrow. In other cases, antibodies can develop to both the drug and platelets at the same time, causing the platelets to drop. Sometimes drugs cause a combination of both bone marrow and immune problems.42

While DITP is rare and can occur with any medication, patients with ITP are not more susceptible to the condition. However, sometimes patients are misdiagnosed with ITP when a substance they ingested caused their low platelets. Patients who have been diagnosed with ITP find that sometimes exposure to a new drug results in their platelet count dropping further.

In the case of DITP caused by an immune reaction to a medication, platelets usually drop within one to two weeks after taking the problem drug. However, low platelets can occur almost immediately after taking certain drugs that interfere with the production of blood clots. If the drug responsible for low platelets is stopped, platelets may begin to recover in one or two days, but the antibodies to the drug can linger in the blood stream for a very long time and cause future problems.2,42 Often the reaction to the drug is specific and a similar compound can be substituted without ill effect.42

A definitive diagnosis of DITP can be made when the following have occurred:

Some drugs have been reported to cause more instances of DITP than others, including:

Published reports of drugs that cause low platelets are tracked by James George, M.D. and colleagues at the University of Oklahoma.2 Unfortunately, many instances of DITP are not published, so there is no comprehensive compilation of problem drugs. The Blood Center of Southeastern Wisconsin has a test for drug-associated antibodies that can help confirm a diagnosis of DITP.46

Some types of food, herbs and supplements have been shown to reduce the number of platelets for various reasons, including:

*Allergic or cross-reaction to platelets in those with sensitivities to that substance, similar to drug-induced thrombocytopenia 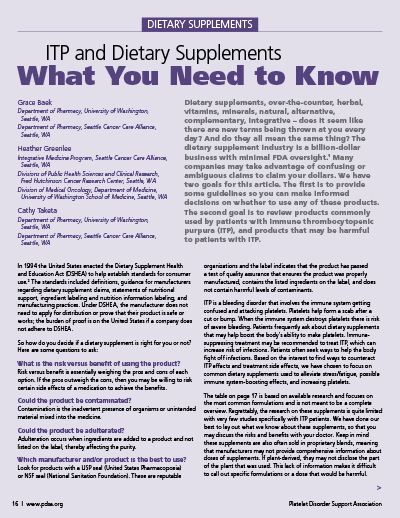 Exposure to certain toxins and household chemicals has been shown to cause a drop in platelet count in some people. Below is a list of toxins that have been documented to cause low platelets; the NIH TOXMAP provides details of toxic locations near you.

Quinine is found in some drugs as well as in tonic water, bitter lemon and bitter melons. Some people whose low platelets were due to drinking or eating sources of quinine have been misdiagnosed as having ITP.

In a study of 343 patients with low blood platelets, 28 (eight percent) were found to have drug-induced thrombocytopenia and 13 of these cases were caused by quinine. As a result, three of these people had an unnecessary splenectomy.2

In addition to impacting blood platelet levels, certain food and supplements can change the way platelets function and make it more difficult for your blood to clot. In addition, these sources when combined with drugs designed to interfere with platelet function—such as Plavix and Coumadin and aspirin—can amplify the effect of these medications.

Many of the listed substances are also antioxidants or have other properties that promote healing. It’s important to understand that common, easily-available substances can have an effect on platelets, although their anti-clotting action is much weaker than pharmaceuticals.

If you have a reasonably high platelet count and few bleeding symptoms, many items listed below will not cause problems unless ingested in large quantities. Ironically, some patients with ITP have a clotting problem and are also taking blood thinners. Others may have a clotting problem and not know it. The propensity to clot and medication status are important factors when considering diet choices. Please discuss any concerns with your doctor.

You’re not alone. We have answers!
Contact PDSA to connect with life altering information, resources and referrals.