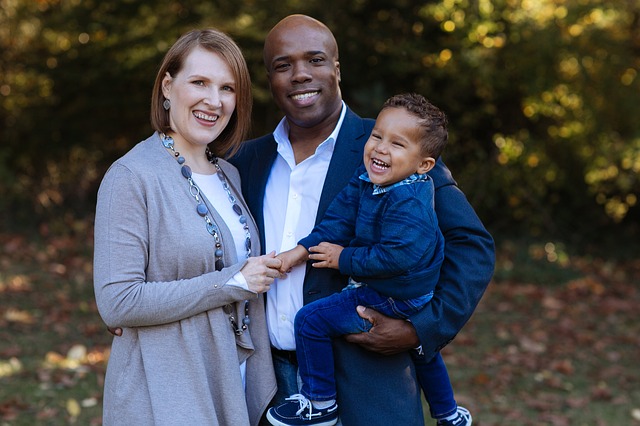 The hereditary nature of autoimmune disorders is an evolving and exciting area of research. Sometimes people are diagnosed with primary autoimmune ITP when they have an entirely different form of the disease. Known as inherited thrombocytopenia or familial thrombocytopenia, low platelets are caused by a genetic mutation (or an inherited mutation), not by autoantibodies, as is the case with primary ITP. There are many forms of inherited thrombocytopenia, all of them rare. This means that physicians, even hematologists, will frequently mistake them for something else. This helpful chart of inherited conditions lists the gene and location, mode of inheritance and key features.

Some of the more common types of inherited thrombocytopenia include:.

These diseases are grouped together because they are all caused by mutations of the MYH9 gene. May-Hegglin anomaly (MHA), the most familiar, is an autosomal dominant condition in which either affected parent can pass the trait to their children, with a 50 percent likelihood of each child having low platelets. MHA is characterized by abnormally large platelets (that are frequently undercounted by automated machines), mild to moderate bruising, and potential for hearing and kidney problems.

Resources and research providing insight into MYH9 Related Diseases include:

The Kidney Foundation of Canada

Wiskott-Aldrich syndrome is an X-linked disorder occurring almost exclusively in males, although it is also reported in females. In those with WAS, platelets are very small and are often accompanied by immunodeficiency and eczema.

Resources and research providing insight into Wiskott-Aldrich Syndrome include:

Congenital amegakaryocytic thrombocytopenia (CAMT) is a recessive condition in which both parents are carriers but neither has low platelets. One fourth of their children (on average) will be affected with severe thrombocytopenia and absence of megakaryocytes in the bone marrow. Because of the severity of this disease, it is usually recognized shortly after birth. This disease is caused by mutations that affect the major platelet growth factor receptor and usually worsens over time until no cells are made in the bone marrow (aplastic anemia).

Resources and research providing insight into congenital amegakaryocytic thrombocytopenia include:

Patients with gray platelet syndrome (GPS) bleed longer than others because their platelets lack some of the protein-carrying sacs needed for a normal blood-clotting process. Platelets without sacs look pale gray under the microscope rather than pink, hence the name. Except in rare cases, the bleeding tendency in GPS is usually mild to moderate. Patients often experience easy bruising, nosebleeds, and, in women, excessive menstrual bleeding.

Resources and research providing insight into Gray Platelet Syndrome include:

Platelet storage pool deficiency refers to a group of conditions caused by problems with the platelet granules, the tiny storage sacs found within platelets, which release various substances to help stop bleeding. Although the disorders have been known for almost 50 years, their molecular mechanism is not well understood. Platelet storage pool deficiencies occur when platelet granules are absent, reduced in number or unable to empty their contents into the bloodstream. Signs and symptoms include: frequent nosebleeds, abnormally heavy or prolonged menstruation, easy bruising, recurrent anemia and abnormal bleeding after surgery, dental work or childbirth.

Hermansky-Pudlak syndrome is a disorder characterized by a condition called oculocutaneous albinism, which causes abnormally light coloring (pigmentation) of the skin, hair and eyes. Those affected by the disorder typically have fair skin and white or light-colored hair, causing them to have a higher than average risk of skin damage and skin cancers caused by long-term sun exposure. Hermansky-Pudlak syndrome also causes problems with blood clotting (coagulation), which leads to easy bruising and prolonged bleeding.

National Organization for Albinism and Hypopigmentation

Bernard-Soulier syndrome is an autosomal recessive inherited disease (both parents must carry the genetic trait) caused by a defect in platelet glycoprotein complex 1b-IX-V. In addition to thrombocytopenia, people with Bernard-Soulier syndrome have very large platelets and platelet function defects that prompt much more bleeding at a particular platelet count than people with ITP.

Resources and research offering more insight into Bernard-Soulier Syndrome include:

Von Willebrand factor is a protein in the blood needed for normal clotting. Von Willebrand disease is caused by a defect in that protein, leading to abnormal bleeding. In the Type 2b variety of this disease, platelets stick to the abnormal von Willebrand factor rather than to each other. This action forms platelet clumps and causes thrombocytopenia. Type 2b can be inherited from either parent and affects males and females equally.

Resources and research offering more insight into Von Willebrand Disease Type 2B include:

Thrombocytopenia cases caused by a mutation in the ANKR26 gene are more prevalent than previously thought, researchers reported in 2011. ANKRDF26-related thrombocytopenia is transmitted by one parent and results in fewer platelets being released from the bone marrow.

Resources and research providing insight into ANKRD26-related thrombocytopenia include: 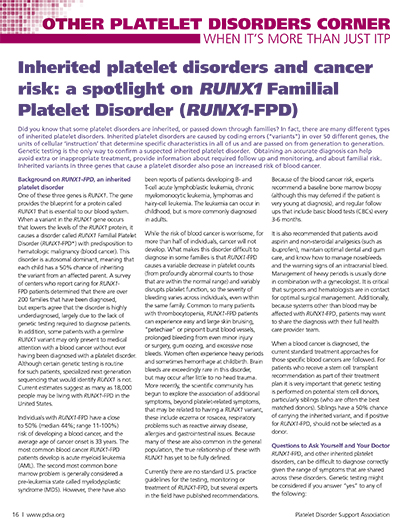 RUNX1 FPD/AML is a hereditary blood disorder that predisposes an individual to develop leukemia in his or her lifetime. The RUNX1 gene is important for the formation and function of blood cells. Individuals with FPD/AML have only one copy of the RUNX1 gene (instead of the normal two), resulting in certain blood cell types being adversely affected. Those with the blood disorder typically present as having low platelets (thrombocytopenia; their platelets are also functionally impaired, causing bleeding problems such as nose bleeds, excessive bleeding during minor surgery and easy bruising.

Resources and research providing insight into RUNX1 FPD/AML include:

A Spotlight on RUNX1 and Inspiring Family Story

People with mutations in the X-linked (male) FLNA gene have large platelets and experience possible hemorrhaging, abnormal clotting, as well as low platelets. This can be associated with periventricular nodular heterotopia (FLNA-PVNH), a disease characterized by the migration of grey matter to places outside of the cortex in the brain.

Resources and research offering more insight into ANKRD26-related thrombocytopenia include:

The GATA1 gene on the X-chromosome regulates red cell and platelet development, causing those with a mutation in GATA1 to have both low red cells and low platelets. Because GATA1 is on the X-chromosome, males who only have a single X-chromosome are affected more often than females, a pattern referred to as X-linked inheritance. Platelets in males who have inherited a mutant GATA1 are typically large and have few of the granules found in normal platelets.

Resources and research offering more insight into Mutations in GATA-1 include: