A diagnosis of the autoimmune disease ITP may change many things about your life, but fortunately it doesn’t prevent you from becoming pregnant—or having a perfectly healthy baby. While there is no research supporting the position that a woman with ITP should not become pregnant, special attention and close coordination between your hematologist, obstetrician and pediatrician can help ensure a positive outcome.

Primary immune thrombocytopenia targets platelets, marks them as foreign by the immune system causing them to be eliminated in the spleen and sometimes, the liver. ITP is defined by a platelet count lower than 100,000 per microliter of blood with no other reason for low platelets.

Interestingly, low platelet counts are a normal part of pregnancy—even for those without a primary ITP diagnosis. In fact, thrombocytopenia is often discovered during pregnancy and has been observed in seven to 10 percent of all pregnancies.

Yet, it is important to determine if the low platelet count is gestational thrombocytopenia or due to another cause, such as ITP. Research has helped define ways to tell if low platelets in pregnancy are due to ITP or some other cause and the best way to treat the condition.

Physicians who treat ITP recommend you have an obstetrician, hematologist and pediatrician or neonatologist (a specialist in treating newborns) work closely with you throughout your pregnancy.

If a woman with ITP becomes pregnant, her platelet count may drop in the third trimester, exacerbating existing symptoms. However, treatments such as intravenous immunoglobulin therapy (IVIG) or corticosteroids (such as prednisone) can be given to raise the platelet count to ensure a safe delivery.

Some ITP treatments used for pregnancy, particularly those that suppress the immune system (with the exception of azathioprine [Imuran®]) or stimulate platelet production, are not recommended because they could potentially harm the fetus. Platelet growth factors or thrombopoietin (TPO) receptor agonists are not recommended during pregnancy because they have been shown to cross the placenta. It’s also recommended that women should wait up to a year after treatment with the intravenous infusion drug rituximab (Rituxan® and MabThera®) before becoming pregnant.3

Corticosteroids, such as prednisone, are known to be safe as far as causing major congenital malformations. However, these drugs are associated with potential adverse effects and some studies have linked prenatal corticosteroids to mental health problems later in the child's life.4

There is no evidence that a cesarean (c-section) is safer for the baby in a mother with a low platelet count, so the decision to have a vaginal birth or cesarean should be based on the best method of delivery given the mother’s circumstances.1

Only a very small percent of babies born to mothers with primary ITP have low platelets at birth; there are no reports that women with gestational thrombocytopenia deliver newborns with low platelet counts. Attempting to measure the platelet count of the fetus carries significant risk, so it is not advised. However, a cord blood count can be safely completed after delivery.2

A pregnancy complicated by ITP or gestational thrombocytopenia doesn’t prevent you from safely breastfeeding your newborn. There is concern among some physicians because anti-platelet antibodies can be passed to the newborn in the breast milk of ITP mothers. However, there is no evidence that children breastfed by ITP mothers are at elevated risk. If the newborn's low platelet count persists, it may be helpful to stop breastfeeding.5 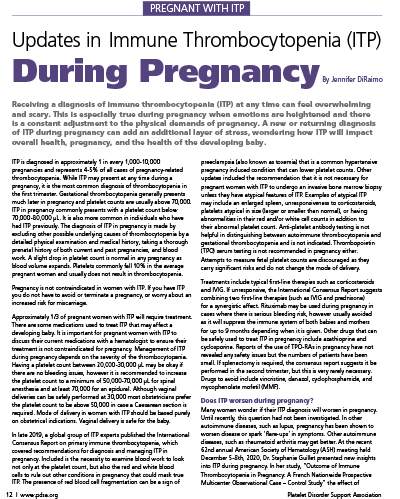 1. Letsky EA, Greaves M. “Guidelines on the investigation and management of thrombocytopenia in pregnancy and neonatal alloimmune thrombocytopenia. Maternal and Neonatal Haemostasis Working Party of the Haemostasis and Thrombosis Task Force of the British Society for Haematology.” Br J Haematol. 1996 Oct;95(1):21-6. http://www.ncbi.nlm.nih.gov/pubmed/8857933

You’re not alone. We have answers!
Contact PDSA to connect with life altering information, resources and referrals.