The US Food and Drug Administration (FDA) has granted Orphan Drug designation to the Rigel Pharmaceuticals ITP treatment Fostamatinib.   Fostamatinib is Rigel’s oral spleen tyrosine kinase (SYK) inhibitor that is now in Phase 3 clinical studies in patients who have ITP.  Current ITP therapies include steroids, platelet production boosters called TPOs, and splenectomy.  According to Rigel, Fostamatinib may address the autoimmune basis of ITP.  Rigel is focusing its ITP program on chronic ITP, targeting the underlying autoimmune cause of the disease, rather than on stimulating platelet production. The SYK inhibitor blocks fc receptor signaling and reduces immune complex-mediated inflammation.  The company’s Phase 3 program for Fostamatinib in ITP, called FIT, has surpassed the enrollment half-way point.  Rigel expects results of the Phase 3 program by mid-2016.
Rigel Pharmaceuticals, Inc. is a clinical-stage biotechnology company focused on finding and developing new, small-molecule drugs.

Parents of children and teens with ITP always wonder whether it is safe to allow their kids to play sports when their platelet counts are low.  A survey was conducted with 279 pediatric hematologists/oncologists regarding how children with ITP are counseled for their participation in sports.  The findings of the survey showed substantial variation in physicians’ perception of contact risk for different sports.  The advice that they offered about restriction of sports activities affected children’s sports participation.   Overall, many of the physicians recommend sports restriction when the child or teen’s platelet counts are less than 50,000.  However, this type of restriction based on platelet count may affect the ITP child’s quality of life even if they have a generally benign disease. 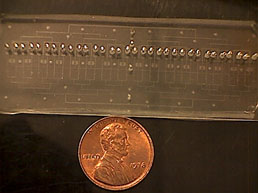 University of Rutgers engineers have invented an impressive new chip that replaces and lowers the cost of complex laboratory tests for diseases and disorders, like syphilis, Lyme disease, and HIV.  This novel device has been developed with small channels that substitute for expensive lab tests that demand high quantities of blood, fluids, and chemicals that are typically mixed by hand by technicians.

The impact of this new invention is monumental: tests for patients and researchers will now be easier to perform, require less samples, and will be significantly less expensive.  Biomedical engineer Dr. Martin Yarmush explains that, “until now, animal research on central nervous system disorders, such as spinal cord injury and Parkinson’s disease, has been limited because researchers could not extract sufficient cerebrospinal fluid to perform conventional assays.”  Because the new “lab-on-a-chip” only requires one-tenth of the sample that normal tests need, investigators can begin to produce large-scale, accurate, controlled studies with ease and can cut down on costs.

With obesity a growing pandemic throughout the United States over the last half century, researchers are constantly trying to find the reason behind why two out of every three adults in the United States are overweight.  Researchers at the Beckman Institute for Advanced Science and Technology at the University of Illinois found that weight gain is linked to the high consumption of fructose in our diets; in fact, this sugar accounts for on average 10 percent of caloric intake for U.S. citizens.  Their findings revealed that, “matched calorie for calorie with the simple sugar glucose, fructose causes significant weight gain, physical inactivity, and body fat deposition.”

The investigators designed a study that examined the difference and related effects between a diet comprised of 18% fructose (similar to most American adolescents) or the same percentage of glucose in mice.  The results showed that the mice fed a fructose-based diet demonstrated significantly increased body weight, liver mass, and fat mass compared to the glucose-fed mice, and were significantly less active.  Dr. Justin Rhodes, the lead investigator of the study and professor of psychology at Illinois, explained that his study concludes that high levels of fructose “play a role in weight gain, favor fat deposition, and also contribute to physical inactivity.”  Ultimately, considering the drastic increase in obesity in America and its negative impacts on health both short and long-term, it is important to recognize what we are putting into our bodies.

If you or someone you know is living with ITP and are 18 years of age or older, this clinical trial may be for you. There is a clinical trial being conducted by Bristol-Myers Squibb with an investigational drug for the treatment of adult ITP (either persistent or chronic). Have you previously received one or more prior therapies? Have you initially responded to at least one therapy if so – you may be eligible? This study has sites in the US, Canada and Europe.

Is your current ITP treatment working for you?

Rigel Pharmaceuticals Inc. is conducting two Phase 3 clinical studies with fostamatinib, an investigational drug for the treatment of patients with persistent or chronic ITP.  If you are at least 18 years of age, have had a diagnosis of ITP for at least 3 months, and have previously received at least 1 typical regimen for the treatment of ITP — you may be eligible. There are clinical trial sites already open in the U.S., Canada, Europe and Australia.