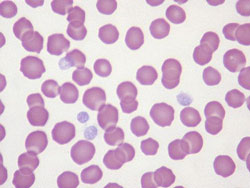 When thrombopoietin (TPO) levels were measured in 118 healthy volunteers and in 88 patients with abnormal platelet counts the average TPO level in healthy volunteers was 39 (7-99) pg/mL (picograms per milliliter). In the 88 patients with abnormal platelet counts, 39 had thrombocytopenia from platelet destruction and 49 had thrombocytopenia from low platelet production. For those with platelet destruction the average TPO level was 63 (48-98) pg/mL). Patients with low platelet production had much higher average serum TPO level of 706 (358-1546) pg/mL. Of 21 ITP patients treated with TPO receptor agonists those who had a TPO level > 95 pg/mL showed a lack of clinical response. Researchers concluded TPO levels help to distinguish between thrombocytopenia caused by low platelet production and that caused by platelet destruction. Also, elevated TPO levels in ITP patients may predict poor clinical response to TPO treatment.

(Editor's note: PDSA Medical Advisor, David Kuter, said the test to measure TPO levels is a blood test called "serum thrombopoietin level", done at Quest Laboratories. For hospitals it is a 'send out' test and has been covered by insurance. This was a retrospective study and the greatest utility in the test is in telling which patients have ITP (TPO levels normal) vs. which patients have other bone marrow issues (TPO levels vastly increased). He said more research is being done on this.)

Researchers discovered a new immune protein that influences autoimmune diseases like lupus. People with this genetic variant can express an additional immune system receptor, called an Fc receptor, on their B cells (cells that make antibodies). Previously scientists thought Fc receptors could only shut down antibody production but new findings indicate 15 percent of the world's population has this new kind of Fc receptor that can also activate antibody production. For instance, in a person with lupus the Fc receptor would create too many antibodies, resulting in attacks on healthy cells.

This new information could help doctors prescribe treatments specific to each patient and provide early warning of autoimmune disease. While recent therapies to treat autoimmune diseases have been aimed at decreasing activity of B cells, these treatments may not be effective for people who have the new Fc receptor variant. Dr. Robert Kimberly, study co-author, said, "This new finding could play a significant role in the way companies design treatments for autoimmune disease, in a more targeted approach." It will also save time and costs associated with clinical trials. 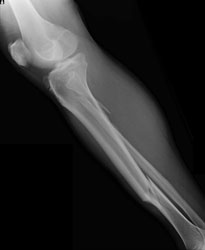 Millions of patients take acid-suppressing medications called proton pump inhibitors (PPIs) and histamine 2 receptor antagonists (H2RAs). They shut down acid production in the stomach but may reduce levels of B12 absorption and increase risk for bone fractures. Well known PPIs include omeprazole (Prilosec®) and esomeprazole (Nexium®). Some H2RAs include: famotidine (Pepcid®) and ranitidine (Zantac ®). Researchers studied 25,956 patients with diagnosed vitamin B12 deficiency (January 1997 to June 2011).

Those treated for two or more years with PPIs or H2RAs had a 65 percent increased risk for vitamin B12 deficiency. B12 deficiency increases risk of dementia, nerve damage, anemia, and other problems. The researchers recommended patients on long-term acid-suppressing meds be screened for B12 deficiency and said B12 supplements are an effective treatment.

In a Swedish study researchers found older men with low levels of B12 were at increased risk for bone fractures. Those with low B12 levels were more likely to have suffered a fracture. Men with the lowest levels of B12 were about 70 percent more likely to have suffered a fracture (primarily lumbar spine) than others. It was not known if eating more foods with B12 such as eggs, fish and poultry would reduce fracture risk.