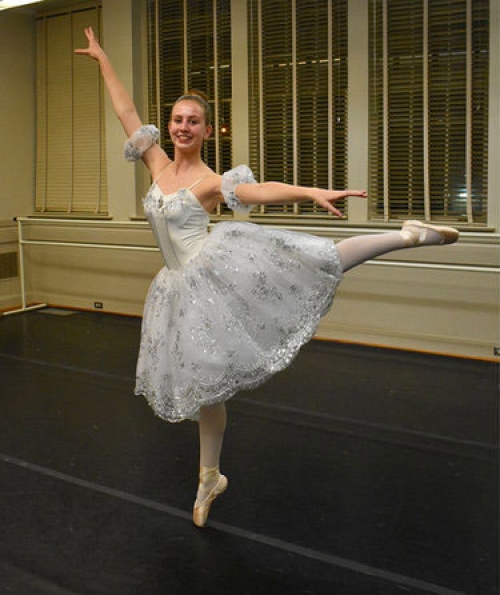 When the curtain goes up for the “Nutcracker,” danced by the Matthews Ballet and Dance, at the McDowell Community Center, one dancer in the group will be happy to be alive, well, and again dancing in this year’s production.

Matthews resident, Caroline Kramb, has been dancing with this group since she was four years old. She is now 15 and has taken on such roles as Angel, the lead – Clara, Chinese, Ginger Child, Waltz of the Flowers, Candy Cane, Spanish, Gold Angels, Party Girl and Soldier.

This year, as in previous years, she will exude the joy and passion that dancing invokes in many. “Caroline is a dedicated student with a passion for dance,” said dance studio Program Director Amanda Sheppard. “She loves performing onstage, and is always a joy to watch.” This year, she will dance the part of “Snowflake.”

Also, as she has in previous years, Caroline will be grateful for this opportunity. However when she performs, many in the audience will be unaware of her ongoing serious medical struggles, her courageous approach to her illness, and her willingness to share her story in an effort to fundamentally help others.

Approximately 2 1/2 years ago, at the age of 12, Caroline developed a severe rash and became extremely tired. What her family thought would be a common trip to the doctor turned out to much more serious. Her bloodwork showed that she had a rare blood disorder called idiopathic thrombocytopenic purpura (ITP). Systems include low platelets and chronic bleeding. “We were in utter shock,” said her mother, Brooke.

Upon diagnosis, Caroline was rushed to Levine’s Children’s Hospital for a short stay and subsequent 18 months of treatments including infusions and heavy doses of steroids – protocols that left her feeling weak, tired and sick.

“It was hard for me with dancing, just going to school and just living my normal life,” said Caroline. “I had to push myself much harder than the other girls. (Although I knew) I am just as healthy and strong as the other girls… (I had an) autoimmune disorder. I looked good, but you couldn’t tell I had to work harder.”

At points, she missed days of school after eight-hour treatments needed every six to eight weeks – “all of that was very emotional,” she said. She was also banned from (her) competitive swimming and all activities for which there might be a propensity for getting hurt (should she fall, hurt or bruise herself, it could cause internal bleeding). Both she and her mother, Brooke, said she felt “embarrassed” to not be able to do things that other kids could do, and longed to just “be like others.”

With that in mind, she ardently chose to continue her weekly dance lessons and maintain her participation in the annual Nutcracker productions.

“I just get really excited for the Nutcracker,” said Caroline. “I’ve had dance in my life longer than anything else I’ve ever done. Being able to (dance in) the Nutcracker every year (gives me) a sense of assurance. When I was a lot sicker, a lot weaker, I still had that event to look forward to, to participate in.”

To her dance teachers and fellow dancers, keeping this routine was paramount to keeping her spirits up. “I know that dance is (Caroline’s) “happy place” and her way to escape her illness,” said Sheppard. “She shows such amazing resilience for someone so young. I think dance has given her the strength to never give up but to always remain determined and focused.”

According to Brooke, the Nutcracker and Caroline’s continued participation in dance lessons (two hours/week for dance classes; up to five hours a week during Nutcracker rehearsals), as well as her family, friends and faith all “helped her cope as well as thrive.”

During her second stay in the hospital, in the chemo-bays, she saw young kids playing but realized that older children had nothing to do with themselves during this stressful and difficult time. The “lightbulb” went off. Caroline said to her mother, “For my birthday, I want to invite my friends, but I want them to give donations so we can make our ‘bags.’ ”

The “activity bags,” as they were called, were intended to be filled with “things to do.” To date, she has made and delivered close to 100 bags and also made several hundred bracelets to pay for the bags, all of which are donated to children/teens also undergoing treatment at Levine Children’s Hospital.

Caroline has also become an ITP activist. Two years ago, she started her own Instagram page called “World Free of ITP,” which she created to “express my feelings…I would talk about when I had to go to the hospital and my thoughts about the journey - to (help others) understand how real this disorder is.”

Last summer, she applied for and received a scholarship to attend an ITP conference in Cleveland, Ohio, where she met with other teens struggling with the same issue, and those hematologists who care for them.

“Before I was sick, I was the wimpiest and weakest person out there,” said Caroline. “I’d cry when I got shots. I wouldn’t take pills. But, after going through all that, I honestly didn’t have a choice. I had to push myself to get stronger and get over my fears. I honestly think it happened for a reason…Coming out of being sick, I just knew, ‘I just want to help other people….so they don’t have to go through this.’ ”

Caroline now wants to be hematologist. When she turns 16, she has been invited to shadow her lead hematologist at the children’s hospital.

Today, Caroline’s platelets are stable and she is considered in remission (there is no cure for ITP). She remains fixated on the goal of learning more and helping others. “Definitely the way she has reached out to others – she has done this entirely on her own,” said Brooke.