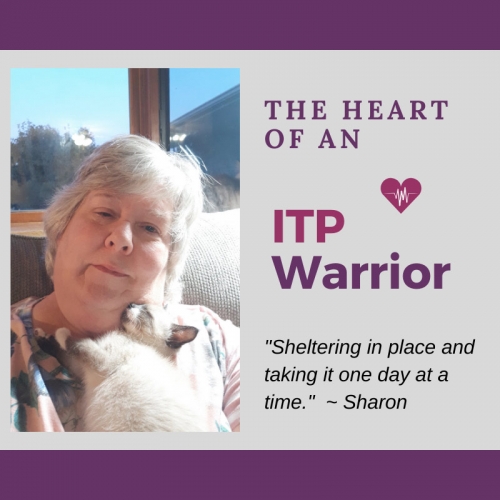 I have had ITP for 44 years now. I was first diagnosed at age 12, with a platelet count of 8,000. At the time, I was one of only five known cases in my state of Nebraska. I was hospitalized for four days with no treatment and my count came up on its own. I was told the ITP would never occur again, but I came out of remission 28 years later while staying with friends out of state. I went to the nearest emergency room and was given an IV of steroids, and then was sent home with steroids.

My count was 11,000. With no further treatment, my count went up and I once again went into remission. Then, 12 years after that, I came out of remission with a count of 0. My local emergency room sent me to a large hospital an hour away. I was there for 10 days before I could go home with a count of 29,000. I was given five rounds of IVIG and one round of Rituxan® while in the hospital, followed by three more Rituxan® infusions. My count was back to a low normal at the second infusion. I managed to stay in remission for four years, then came back out of remission with a count of 9,000. I was put on dexamethasone, which ended up causing steroid-induced diabetes. It was three months before I was strong enough to work a 40-hour week. I was in remission for 1½ years and once again came out of remission after a vacation with a count of 1,000. I did not require hospitalization this time, as my hematologist was comfortable with me keeping an eye on things, along with daily labs. A PICC line was put in and I started prednisone and Rituxan® again. After four infusions, I was just at 150,000 so my hematologist decided to do five more Rituxan® infusions – one a month. I had my last infusion on December 14, 2018 and have been in remission since then. My hematologist has told me it’s not a matter of if I will relapse again, but when. But I am 56 years old and have lived with ITP for 44 years, so I do what I can and lead a pretty good life.

As of late March 2020, Sharon continues to be in remission; in the midst of the COVID-19 pandemic, she is sheltering in place and taking it one day at a time.