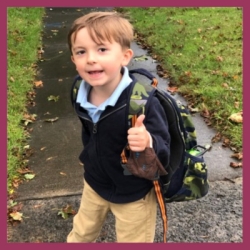 Like all five-year-old kids do, Oliver got a bump on his head playing around. His dad and I initially laughed at it because Oliver’s school picture day for kindergarten was just a few days away. But within hours of the bump, a bruise had formed and took over half his face. Throughout the day as things got worse, I checked in with some family and friends who were in the medical field, and everyone agreed that it would get better soon and there didn’t appear to be any damage. The next morning, Oliver’s eye was swollen shut and the bruising was very dramatic. We immediately called our pediatrician’s office, and there was definite concern and confusion over the bruising on Oliver’s face. Our doctor suggested I bring Oliver to the hospital – not the one we would normally go to, but Strong Golisano Children’s Hospital – and get a CBC.

I drove Oliver directly to Strong. After hours of tests, dozens of new bruises and spots, and tons of questions, things clicked with the medical team. Sure enough, Oliver’s platelet count came back under 1. Almost immediately, there was reassurance and action. We quickly met with two hematologists and Oliver was admitted for Intravenous Immunoglobulin Therapy (IVIG). We were told that it could be a roller coaster for a bit while the team determined what would work best for Oliver, but his counts immediately went up.

Oliver was released a few days later and was allowed to return to school the next week, but he had a lot of restrictions because his platelet count was still in the “danger zone.” He was our bubble boy. No running or jumping – no possibility of any bumps or bruises. We were very lucky to have a great team at the school who assured us they could keep him safe, and he returned to school.

While we waited to see if his platelet counts would level out, Oliver had blood tests several times a week and was managed by the Hematology-Oncology team. We had a few ups and downs with levels, and Oliver was put on steroids for a few days. Ultimately the steroids had the most positive impact, and he was considered to be in “sustained remission” about two months after his original diagnosis. We believe that the ITP stemmed from a virus that Oliver had a few weeks before the bump.

There are so many other things to share about how scary the unknowns were, but Oliver was a trooper, and his medical team was amazing.