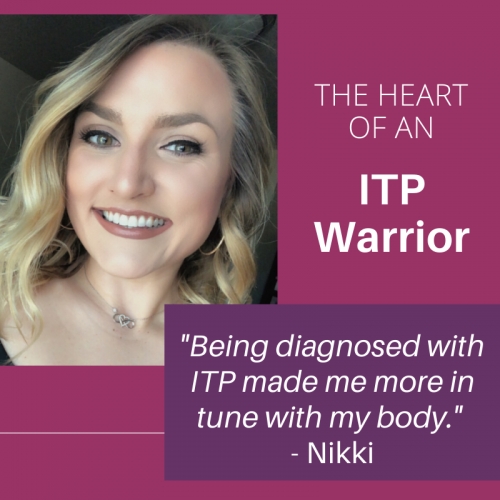 “Being diagnosed with ITP made me more in tune with my body.”

It was summer 2014 – I had just graduated with my Bachelor’s Degree in Psychology and was visiting my friends and family back home. My father told me, “Nik, you look like a cheetah! You need to go to the doctor.” You see, I was covered in bruises. Not just a random bruise from running into something that you don’t remember running into – they were all over. We all assumed I was anemic, no big deal. I went to the doctor and received a physical and lab work.

One week after that appointment, my doctor called me and said I needed to come in ASAP for more testing. In my head I thought, “What the heck,” but went back in as directed. It was at this appointment that the doctor told my mother and me that my platelets were extremely low, and I needed to see an oncologist. First of all – what are platelets? Second – oncologist?! Like for cancer?! I started crying as my mom held me.

My one-week vacation home turned into a month-long nightmare with a million different medical tests and doctors looking at me. I ended up having a bone marrow biopsy – and to this day, I do not wish that pain on my worst enemy. From there, they ruled out lymphoma and lupus, and we learned that I had ITP… and it had gone nearly THREE YEARS undiagnosed! I was completely uneducated on what this disease was but was determined to not let it get me down. After establishing with a hematologist, I tried prednisone to help increase my platelet count, but unfortunately all it increased was my weight. In December of 2014, I had Rituxan® infusions for four weeks. My platelets have not been dramatically low since then.

I still see my hematologist every three months to ensure that my platelets are at “my normal,” but I have to say, being diagnosed with ITP made me more in tune with my body. I can read my body better than ever before, and while everyone does not understand my story, they respect that I take care of myself to the fullest. Two-thousand, fourteen was a joyous and scary year for me.

Today I am engaged, living in Montana, and serve as an Adult Case Manager working with adults with mental illnesses. My life has changed since being diagnosed with ITP; however, I am grateful to have found the correct diagnosis and am living my best life now!