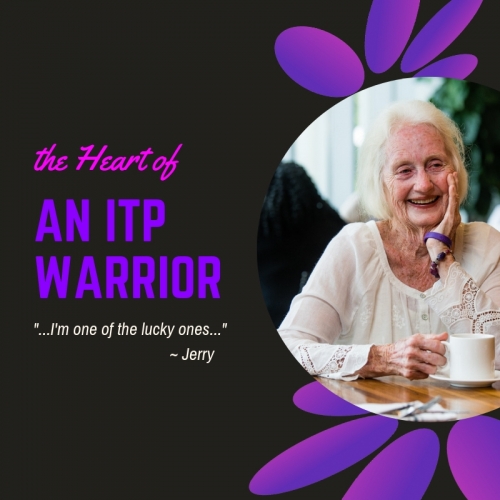 At 78 years young, this former teacher continues to enlighten and touch the human spirit.

Jerry Jones considers herself one of the “lucky ones.” As a retired high school science teacher whose classroom was “connected” in 1995, Jerry mastered two skills essential to patient advocacy: identifying the problem and gathering information. Jerry knew that scientific studies are designed to answer specific questions on how to prevent, diagnose, or treat diseases and are critical factors in improving methods of health care. She also knew she had a global network of information and communication services at her fingertips and by entering a few select key words she could unleash a knowledgebase packed with the power to overcome ITP.

In November 2010, Jerry had some testing done when she happened to visit a health fair at the local hospital and the results revealed a 64,000 platelet count. Already scheduled to see her family physician in December, she brought the results with her. Concerned with the results, he checked her platelet count the day of her appointment and found that her count had dropped to 54,000. Jerry recalled how he was swift to point out that he didn’t feel that she had cancer but felt she should be seen by a specialist. “I’m sending you to see a hematologist and you are going to see the word ‘oncology’ on the door, but I don’t want you to worry. This is who you need to see,” he said as he reassured Jerry that he didn’t think it was cancer.

Because of her age and continuous drop in platelet count (Jerry’s platelet count was at 44,000 by January), the hematologist felt she should have a bone marrow biopsy to rule out MDS (myelodysplastic syndromes). When the test came back negative, he diagnosed her with ITP and immediately started her on 60 mg of prednisone. “I went home and took the first dose and that evening I found myself wide awake at 4 am with my brain in turmoil and going every which way. I thought to myself, “Why…what have I done differently over the past several months that may have caused this?” As Jerry recounted the months leading up to her diagnosis, she remembered that in October she was given the H1N1 vaccine (flu shot). She remembered hearing about the Vaccine Injury Compensation Program on a radio program in 2009 and began to do her research into both the vaccine and the program. When Jerry saw thrombocytopenia listed in the full prescribing information, she decided to submit a petition to the U.S. Court of Federal Claims and was granted compensation. “I want to point out that I am not anti-vaccine – we would shut this country down without them, but I am pro-Vaccine Injury Compensation Program. As patients, we need to educate ourselves, and then communicate with our physicians,” Jerry said.

“I wasn’t sleeping those first three weeks and I’m one of the lucky ones who knew how to search the internet. One fine hour, in between cleaning while that prednisone had me awake, I sat down at the computer and was finding all kinds of stuff. I knew about reliable websites and PDSA popped up pretty quick and I joined almost immediately. I also found the International Consensus Report on ITP and I knew that since people from PDSA were involved it must be good and I read all 40 pages of it! After I read it, it gave me peace because it was clear that my hematologist knew what he was doing because he was following those guidelines,” Jerry said confidently.

“My hematologist has been my security blanket, I mean honestly, I don’t know what I would have done without that man,” she continued gratefully. “I know they don’t normally start treatment right away, but mine did. I think he saw the fear in this old woman’s face and said, “I need to do something and help her,” she said with a laugh. “It’s changed my life drastically. I don’t know what I would have done. He didn’t want to jump into a splenectomy, so he tried the dex (dexamethasone) and it worked. I took the last pill in 2012 and have been in normal numbers ever since, but ITP is always in the back of my mind – I know the shoe can always drop,” she said.

Jerry also expressed gratitude for her family physician who also kept a close watch on her overall health. In 2008, Jerry joined and successfully completed a hospital weight loss program in which she shed nearly 100 pounds. Not only did Jerry beat her battle with obesity, she also overcame diabetes and attributes healthy eating and regular exercise as the means to an end of an unhealthy lifestyle. “My A1C did rise to 8 when I started on the prednisone and I hadn’t been on any medication for my diabetes since the weight loss. I don’t know what I would have done without my family doctor who monitored that as well,” said Jerry.

Although she’s enjoying remission, Jerry keeps all issues of The Platelet News since she became a member in 2010. She makes notes on the cover about any new research, treatments or findings and uses them as references. “I made note of fatigue on the cover of an issue from 2011, yet there are still so many doctors who don’t acknowledge that it’s a symptom,” she exclaimed. “I’m always educating myself with the newsletter and website and have reams of paper of printed information I keep in a binder for myself. When I’m online and see what some people say their doctors tell them…well, I know a lot more than their doctors do, unfortunately,” she continued with a giggle.

In addition to her personal ITP library, Jerry sites the ITP Conference as one of her key learning tools. “After attending four conferences, I realized that the presenters are the top in their field – they are more focused on ITP and really know it. My hematologist is great, but he sees lots of other patients with other problems. He’s not focused on ITP and that’s why PDSA’s resources are so important to me,” she said.

PDSA Members may recognize Jerry from her advocacy work in the PDSA Closed Facebook Group, several other Facebook groups, in other online forums and at ITP Conference - Jerry shared her ITP journey as part of the patient panel at ITP Conference 2018. “ITP has no cure. I know I’m in this for the long haul and want to be informed. If I go out of remission, I want to know what my choices are - it was exciting to see that TAVALISSETM was FDA approved and that some people are having success with it - and I try to educate people when I’m online because there’s a lot of misinformation out there. The PDSA website is a wealth of information and it’s so important to get real information because if you are informed, you can have those conversations with your doctor,” Jerry commented.

Jerry also has a few other tools in her survival kit that she feels help keep her protected and on track maintaining a healthy lifestyle: a cell phone, medical alert bracelet and Fitbit. “I always try to have my cell phone on me – in case there’s an emergency and I need help. I wear a medical alert bracelet that has my son’s contact info on it, a purple caduceus and even has interchangeable bracelets and I just replaced my Fitbit and wear that, so I can work on getting in more steps,” she said as she laughed.

Jerry noted how drastically life has changed since the passing of her husband in November 2017 and how she now attends doctor visits alone but feels blessed to have her two sons and four grandchildren. In addition to championing the cause for ITP, Jerry keeps busy in her garden where she tends to her favorite flower – the purple coneflower and even tilled the ground last August to plant winter greens. She travels when she can, spends precious moments with her children and grandchildren and when asked how her family feels about her advocacy work, Jerry simply replied, “It’s not too often you receive compliments from your adult children, but PDSA has afforded me those compliments when they see what it’s about.”

Wife, mother, grandmother, educator, advocate – a winning combination in the fight against ITP and a priceless ally in the All-Star lineup of ITP Awareness Champions. We’re lucky to have you on our team, Jerry.