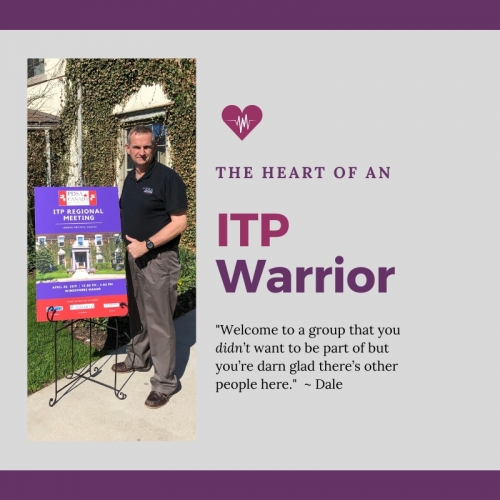 Welcoming wandering warriors into a rare and instinctively remarkable family.

In March of 2010, Canadian ITP patient and advocate, Dale Paynter became aware that he had a low platelet count after a company medical screening – a requirement of a medical surveillance program for environmental engineers – which led him to schedule a visit with his family physician.  What ensued over the next several months and years would lead him on a global journey that he could never have imagined.

“Outside of the fact that the first time you hear of something is when you are told you have it is unsettling, it’s also what makes it so hard to talk about,” began Dale.  “There’s more of us out there than we think, more that are talking about it, and we need to spend more time and effort – for more public awareness.  You can’t be alone with this.  I can’t imagine how people lived with this before support and awareness came into being - living a whole life without having anything or any way to communicate with others who understand.  I couldn’t do it,” he said.

Dale considers himself blessed as immune thrombocytopenia has not impacted him to the degree that it has some patients. “There are days you go through the symptoms and the anxieties and the fatigue.  I don’t have as much as I did when I was first diagnosed and I’ve noticed more doctors recognizing the fatigue where they weren’t in the beginning,” he said gratefully.  Since his diagnosis in October 2010, Dale’s ITP treatment journal has grown to include watchful waiting, dexamethasone, IVIG, splenectomy, fostamatinib, rituximab and eltrombopag.

From 2011-2014, Dale found success with IVIG in keeping his platelet count up until it began to “lose its punch. The IVIG would get my counts up to around, say 180,000, and then would drop back down, pretty much like clockwork,” he noted.  This observation led his hematologist to suggest a regular IVIG treatment schedule to avoid unnecessary trips to the lab for bloodwork.  This helped normalize life a bit for Dale in terms of work obligations, offering flexibility in scheduling meetings and responsibilities around treatment appointments. Although Dale never exhibited common side effects such as headaches or nausea, scheduling time for IVIG every three to four weeks eventually became quite burdensome.  So, he began to seriously consider a splenectomy and in the fall of 2014, his spleen was removed, and it failed. “The way I put it is for two-thirds of the people that have success, you still have to have a third that don’t for your data.  So, I went back to the IVIG,” Dale snickered.

From December of 2015 through March of 2016, Dale considers himself fortunate to have taken part in the fostamatinib (Tavalisse™) clinical trial, but unfortunately, it too proved unsuccessful in stabilizing his counts.  “It was the first time I had experienced petechiae because we allowed my counts to drop to 4,000.  It was back on the IVIG for me,” he said.  That same fall, Dale tried rituximab in hopes of higher counts, but again, to no avail.

It was in December of last year that Dale seemed to get some relief. Eltrombopag, known as Promacta® in the U.S. and Revolade® in Canada and Europe, has been keeping his platelet counts in the 30,000 to 40,000 range.  “I still have to go in for IVIG one day every eight weeks but going from two days every three weeks to one day every eight has been phenomenal and taking a pill every day has been keeping me reasonably stable,” he commented with delight.

During his rollercoaster ride in managing what Dale will only refer to as a “condition,” he’s managed to educate himself with valuable resources, connect with others walking similar journeys and made it his mission to generate public awareness not only in his country, but around the world. When diagnosed in 2010, Dale’s support care worker in his hematologist’s office handed him a PDSA booklet. He began to read and dive more deeply into the resources the organization had to offer and found himself attending ITP Conference 2011 in Boston, MA. “When I came back from Boston, I told [my wife] Susan, I don’t care where they are next year, you’re coming to meet my new family. I brought her to Denver, and I knew I’d never get to come back without her.  I wanted her to meet the people helping me so she could be a part of it too.  I couldn’t do any of this without Susan.  I have wonderful family support, an online family, my PDSA family and nurses and doctors who have also become like family,” Dale said gratefully.

In 2012, Susan attended ITP Conference 2012 in Denver, CO and so, it began…as the couple made their drive northward home from what they now call the annual PDSA Family Reunion, they imagined the day when much needed education, awareness and support was available to ITP patients in Canada. “Our vision driving back was to have a one-day meeting – just so people could talk to a specialist in person and meet others experiencing similar issues,” recalled Dale. It wasn’t long after that Dale took his first steps in that direction and began facilitating the Waterloo-Wellington ITP Support Group and in 2017 was instrumental in laying the groundwork for PDSA’s first Regional ITP Meeting in Montreal, Canada with over 50 people in attendance.  “The first PDSA Canadian Meeting showed those of us who facilitated PDSA local support group meetings here that we’re not just a “branch” office anymore, that the big guns are willing to come up here and talk to us.  It showed patients here that we matter, that there are people who really do care about what we’re up to and we are having the same issues here that patients have in the U.S. and around the world. It showed Canadian patients that the people doing the legwork have the support, have the ear of the pharmaceuticals and they’re on our side and doing things to help us to manage this, get through this and to live with this,” he commented.

Energized by the well-received Canadian meeting and determined to fulfill a life-long dream of a trip Down Under, in 2018, Dale helped facilitate PDSA’s first ITP Regional Meeting in Melbourne, Australia. When asked what he found most inspiring, Dale said, “I have a mild case.  I’ve been able to continue with my career, I need to be more cautious in what I do – can’t play hockey anymore, but if the fact that I can get out and talk about this on behalf of other people who have this and can’t get out or attend a [PDSA national ITP] conference, but if we can’t get everyone to at least one, we’ll come find you.  If you had told me 10 years ago that I would be facilitating a health conference half way around the world, I would have thought you were crazy.  That was one of the highlights around something I had wanted to do for 30 years.  ITP wasn’t going to stop me from going.  I said to Susan I can either go and something can happen (which we had covered – we knew what we were doing and had a [health] plan in place) or we don’t go, I’m miserable and wish something had happened.  I met wonderful people. Danielle Boyle (ITP Australia Founder and CEO) is amazing and is doing amazing things!”

After almost a decade of living with ITP, Dale has some words of wisdom for the newly diagnosed, “It’s going to be okay - it’s not the end of the world.  It’s something you need to learn how to live with, manage. We’re not all the same, there’s things we can do, there’s things we can’t do, but between associations like PDSA and others around the world, you learn very quickly that you’re not alone. Welcome to a group that you didn’t want to be part of but you’re darn glad there’s other people here.”  He’s also optimistically hopeful by the uptick in research and innovation in the ITP community. “The number of pharma companies becoming involved shows that ITP is something that needs to be looked at – there’s no silver bullet and maybe we can help find an answer.  If you can help maintain [patient] quality of life without a financial burden, that’s what I’d like to see,” he said.

Dale Paynter also serves on the PDSA Board of Directors, has taken part in numerous awareness and advocacy projects in Canada and is a contributing champion of the cause in online ITP communities.  His wife, caregiver and faithful companion, Susan can be found traveling the journey as well – pitching in wherever needed or unassumingly encouraging him from the sidelines while admiring his fierce spirit to beat ITP.

Learn more about the intercontinental partnership of ITP patient support organizations and ambassadors at www.globalITP.org