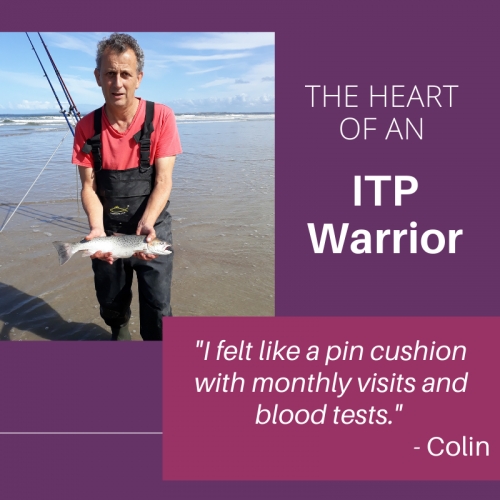 Working towards normal and taking it one day at a time

When I was a teenager I always bruised after sports. I got married and was a father at 19; then in my mid-twenties I lacked energy at times, so I began getting tests. I felt like a pin cushion with monthly visits and blood tests – my platelets were hovering around 20,000 or dipping as low as 12,000. I was offered steroids but refused, and over the next thirty years or so, I slowly reduced visits to yearly. About ten years ago, my counts were hovering around the same range – between 12,000 and 25,000.

Then in spring 2018 I had a nose problem and was given steroids which helped both my nose and my platelet count. Two months after finishing the steroids my count dropped to 4,000, so I was put on a high dosage (80mgs) and weaned off slowly, but then my counts dropped back down to 5,000. I was put on eltrombopag (50mg) for five months and my counts went up to around 30,000 – 40,000 but decreased after a while.

I was offered rituximab, but it was no good; I went back on eltrombopag and have been on it for 18 months. One thing I have had problems with is the dentist; I was told I needed root treatment or extraction, but I have had problems with attempted root treatment before – I would experience swelling or bleeding under temporary fillings because of my ITP. I opted for extraction, but my dentist said he is not prepared to pull a tooth unless he has signed paperwork, which I am currently working on. I will ask my doctor if I can be referred to a hospital dentist, but I feel out on a limb. I am on antibiotics now and I think the hospital dentist would be best because I could get my platelet count done on the same day as the procedure.

Besides a loose backslide, I’m still alive and doing most things a 62-year old does. I’ve thought about a possible spleen removal if things take a turn, and I’m not sure about long-term eltrombopag effects, but hopefully I can cope.