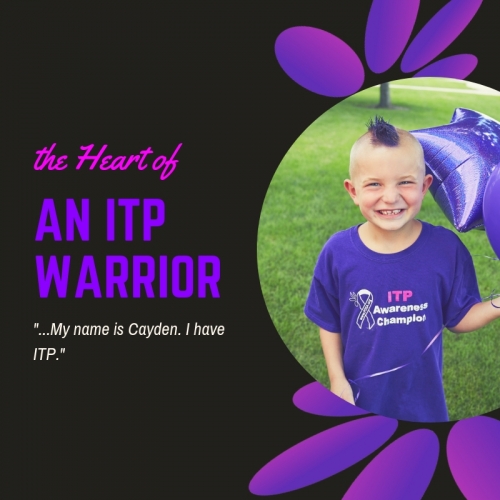 How a little ITP Warrior transformed his journey into an adventure and gave back.

There are those who live life by the proverbial phrase, “When life gives you lemons, make lemonade.” And there’s the Krueger family, who when life delivered an ITP diagnosis to seven-year-old Cayden, they redirected the course down a road to adventure. Diagnosed just a few years ago at age six, this little warrior and his family refuse to let ITP win the battle.

Cayden’s journey began on summer vacation when his mom Jennifer noticed bruising – lots of bruising - bruising in odd places. As with most little boys, Cayden loved to play, loved contact sports and more than anything, loved wrestling with his then 16-year-old brother Cody. As a mom, Jennifer chalked it up to normal roughhousing and asked the boys to curtail the intensity of their moves, but as a nurse, she continued to monitor his condition. “When bruising got to the point, where as a school nurse I felt I would be calling CPS, I knew it was time to take him to the doctor to see if something was going on,” said Jennifer.

Just nine days after his sixth birthday, the pediatrician had Jennifer take Cayden for a lab workup. Minutes after leaving the clinic, Jennifer’s phone rang. Cayden’s platelet count was 7. “Pack a bag for Cayden and make arrangements for your other children – you’re going somewhere tonight,” the doctor said. “I panicked,” Jennifer said. “After 16 years in the medical field, I know too much - I just knew he had leukemia…” until their appointment early the next morning. After examining Cayden’s platelets, the doctor at Children’s Hospital of Wisconsin told them that because Cayden’s platelets were so large, he was sure it was not leukemia. “Then he said, ‘I know exactly what this is’,” continued Jennifer.

And Cayden’s ITP journey began… ten days of prednisone with counts spiking to 110, bottoming out, spiking back up to 70, and bottoming out yet again. Then, they administered IVIG and although his counts still fluctuated, immunoglobulin therapy approximately every three to four weeks helped better manage Cayden’s counts and eliminated the need for long-term steroid use.

Fourteen or fifteen months into his journey, unbeknownst to Jennifer, Cayden bumped his head on a low ceiling. Cayden was covered in bruises and since they had a standing CBC order, Jennifer took him to be tested. Leaving the clinic, she noticed a large bump on his head and asked him what happened. Once again, as a mom, Jennifer did her best not to panic, but as a nurse knew she must monitor his condition. Later that evening, a headache and vomiting developed and Jennifer wasted no time calling the doctor. An MRI showed a slight bleed in the brain and Cayden’s platelet count was five so IVIG was administered promptly to bring up his count. He spent two nights in the hospital with two more rounds of IVIG and added another episode to his growing list of triumphs over ITP.

Although it’s been a rollercoaster, Cayden and his family have settled into the reality of living life with ITP – no, not a life of inactivity, but one of cautious optimism. One in which activities like wrestling and football may no longer have a place, but one in which other, less aggressive activities can also prove exhilarating…even fulfilling. “I used to search his body for bruises all the time – I mean on a daily basis!” said Jennifer. “Cayden just wants to be normal. He wants to wrestle and play football…and he can’t. We’ve made it our new normal not to talk about it every day – it’s time to accept it and be done, so we make having ITP fun. We know he’s chronic, but we believe in miracles. We pray often and know that one day it will go away.”

Like any great warrior, Cayden is surrounded by a contingent of allies and equipped with the essential tools that foster the strength required to beat ITP. In addition to his family, Cayden has been blessed with an outpouring of support from the local community. There was the fundraiser held at Turner High School to help support medical costs and the gift of his service dog, Feather – a retired golden retriever show dog who has been trained to detect a low platelet count. Heartened by these actions, last year the Kruegers organized the 1st annual Pump It Up For Platelets! event in Beloit, WI. Their goal was to raise $1,000 and they hoped for at least twenty people to attend, but little did they know that they had set the bar far too low. Their event raised over $10,000 with over 200 people in attendance. “That was bigger to me than my son having ITP because we want people to know about ITP. We want a cure,” continued Jennifer and support for this little ITP Warrior did not end there. Instead, it was just the beginning.

Inspired by his story and impressed by his eagerness to give back, Cayden was selected as the 2017 Shopko Kick Off Kid and was offered tickets to attend a Packers game, complete with an Aaron Rogers jersey and a $500 donation to PDSA. Cayden’s response wasn’t much different than any fan, “Are you serious?! I get to run out on Lambeau field?!” Wearing his Packers jersey and sporting his signature purple mohawk, Cayden was escorted down to field level for the big game. He ran out to center field, picked up the kick-off tee, was scooped up by coach Mike McCarthy for a round of high fives from the whole team and hung out with Clay Matthews on the side line. As pictures of Cayden flashed on the jumbotron, the crowd cheered and something even more wonderful happened – that little boy who had been stripped of his childhood by ITP was now part of the game. For this moment, this little ITP Warrior was just Cayden - a little boy living his dream - standing on the side line of a football field.

Encouraged by local admirers and empowered by the ITP community, Cayden certainly understands the power of outreach. He is an active member of PDSA’s Poke-R Club for kids with ITP and an Adopt-a-Patient for the CSL Plasma Program where he helps educate donors about the importance of human plasma donation. When he learned the journey of a woman with ITP from his mom, Cayden crafted a handwritten note and colored a picture to help brighten her day. “Dear Laura, My name is Cayden. I have ITP,” the letter began, “My Mommy told me that you have ITP too. I will pray for you. #Laurastrong #Caydenstrong Love, Cayden Krueger.”

The sweetest victories frequently emerge from life’s most difficult struggles. Has immune thrombocytopenia soured your journey? Refer to a page from Cayden’s playbook – take back the wheel and redirect the course. Be empowered. Celebrate life’s simple pleasures, share some love, stay strong and BEAT ITP!