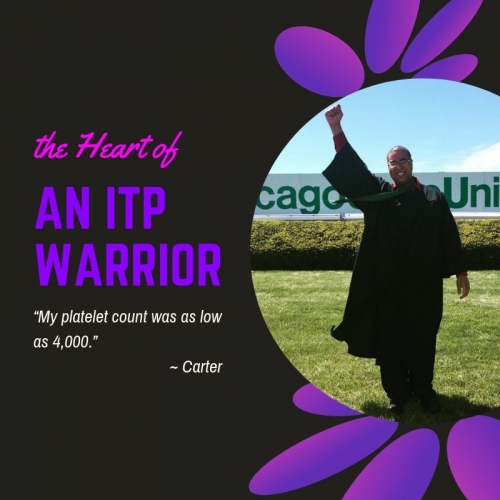 Staying levelheaded while bouncing back from a life-changing visit to a walk-in clinic.

My name is Carter Sanders. February 2018 changed my life forever, as well as the life of my entire family. One Tuesday evening that February, I noticed some red bumps on my arms. I thought that was unusual and figured it couldn’t be chicken pox because I had them when I was 5. I assumed it was likely an allergic reaction since I was sweeping the floor that day. Then over the next couple of days, I noticed some blood blisters on my tongue and cheeks. I thought it might be hand-foot-and-mouth, considering I had that in the summer of 2014. I didn’t remember having those blisters in my mouth, but thought maybe it was a symptom that didn’t occur the first time I had the virus.

I was mistaken. I called the doctor to make an appointment to confirm the diagnosis, but he was out of the country. Since he was unavailable, I went to the Walgreen’s take-care clinic. Before I got there, I noticed an alarming symptom – my right eye was bloodshot. At the clinic, the nurses were astonished by what they saw. They told me it wasn’t hand-foot-and-mouth, but that it looked like some sort of bleeding disorder and that I was going to have to go to Urgent Care to get an immediate blood test.

I then went to a nearby Urgent Care facility. When they finally saw me, they agreed with the nurses at the clinic and told me this was indeed a bleeding disorder, possibly ITP. They sent me to the emergency room since they did not do testing there. By then, my mom had come back from work and was notified of the situation. She drove me to the emergency room, where they gave me blood tests and CT scans, and based on their findings, it turned out I did indeed have ITP. My platelet count was as low as 4,000. They admitted me to the hospital, where I stayed for four days.

I was supposed to go to the LSAMP Research Symposium that weekend with my college, but of course, I did not go. I had to tell everyone the situation. I also had to tell my coworkers what was going on, and they were definitely worried about me.

During my stay, I was under the care of nurses and caregivers. There was one nurse in particular who made me feel at home and very welcome there, and I appreciated her upbeat personality. I was given steroids in an IV to increase my platelet count. It eventually increased to where it’s supposed to be, and when I was discharged, I was put on daily doses of prednisone. I also had to take a week off work and was instructed to follow up with my hematologist on a regular basis.

Since this ordeal began, I have been feeling better and the medicine has helped.