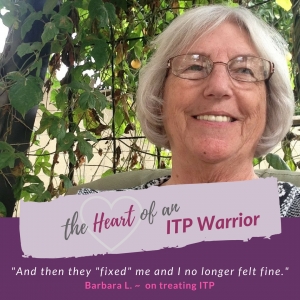 As a fatherless kid I was often teased for having "bad blood" and in my 60's that became true.  Initially, I thought the horde of freckles creeping up my feet and legs was just another old-age thing, but when they appeared where the sun don't shine, I decided to seek a medical opinion. Along with the zillions of freckles (purpura), I had more bruises than normal but being a klutz, I gave them no thought.  Upon hearing the doctors and nurses discuss calling for an ambulance, I said a prayer for that poor soul. Then they came into my room and identified me as having a horrendously long named, life threatening bleeding disorder where my immune system destroyed my platelets faster than they could be made.  Next, they explained that those freckles were pools of blood leaking from my veins...What?!  They actually plotted a safe route to the hospital, ordered me to not go home, not buy a magazine, not stop for lunch, not hit a pothole, not get in an accident, and try not to sneeze!  Yet I felt fine.

And then they "fixed" me and I no longer felt fine.  Four tries: two 12-hour IVIg's that required blood pressure tests every 30 minutes and turned my arms a deep bruised black; steroids that gave me hallucinations, jitters and the munchies; four 6-hour Black Boxed infusions that required me to sign off on the knowledge they could kill me during the infusion; and finally, a brand-new pill that is keeping me at half-staff (half low normal, so no playing with knives).  Hallelujah!  For children this is truly horrible as every bump and fall can be life threatening and for those with poor insurance, stuck on inexpensive steroids, their life is miserable! The medication I am on is not covered by Medicare as apparently at my age, I'm expendable...ahem. Even dogs can get this orphan (under funded) autoimmune bleeding disorder!  I wonder how they see their freckles?