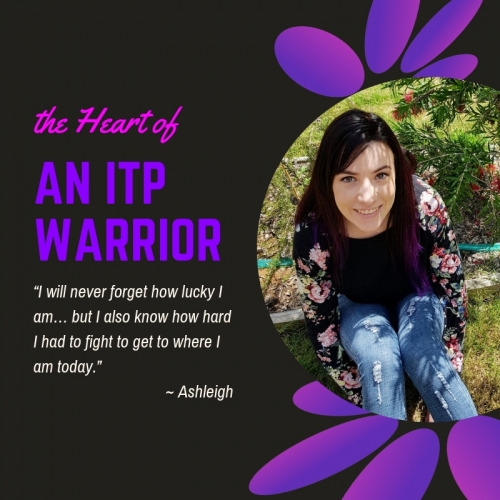 I was diagnosed with ITP after suffering from heavy bleeding and undergoing a second blood transfusion. Although I was unable to come off steroids without dropping down to zero, I was lucky enough that six months after my diagnosis, I was able to go on a trial drug – eltrombopag – as an outpatient with my spleen, much to the disapproval of doctors. This helped for a year and a half before I stopped responding.

I went back on steroids as another trial was opening up soon. I waited months before I could start this treatment because I needed to have platelets less than 30,000 and could not be on any more than 10mg of steroids. This was a tricky situation to balance. I ended up plummeting and was admitted into the hospital with internal bleeding. It took five days to respond to a combination of immunoglobin and steroids, and I nearly had to have an emergency splenectomy.

After three and a half years of dealing with ITP, I was finally able to start the trial infusion. This was an eight-hour day at the hospital every two weeks for four months, and then a further six-month treatment once a month. After 12 months of observation, I am in remission and my platelets happily sit at 270,000 with no medication needed. As far as I am aware, this trial drug was available for a limited time in Australia and America, and I am the only person to have gone into remission because of it. Unfortunately, due to the lack of response in people, it will not be available to those who suffer from auto-immune diseases.

I will never forget how lucky I am to not only have had this treatment available in a public hospital, but to respond so positively to it. But I also know how hard I had to fight to get to where I am today.